How Social Media is Forever Changing the Engagement Process

It was not long ago that when your boyfriend got down on one knee and popped the question, it would forever remain in private between the two of you. You would hold that memory dear and tell everyone you knew about it through word of mouth for years to come.  With the advent of social media, the engagement process has forever changed.  Now, with the rise of geo-local apps such as Foursquare, Facebook Check-In and Twitter, everyone knows where you are and what you are doing.  The once private question of marriage is now made available for the world to view.  Imagine proposing marriage to the girl of your dreams and U-streaming it only to have her say no.  One man, Matt Van Horn, recently made national headlines for his integration of social media into his proposal (she said yes, don’t worry!) 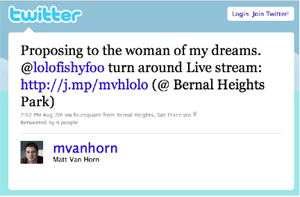 Social media was a focal point of Matt’s relationship with fiancée Lauren Fishman from the very beginning.  He initially met Lauren at his hookup fraternity house, Alpha Epsilon Pi.  After bonding with her on Facebook, they digitally connected via Instant Messenger. When Matt was finally ready to pop the question, he turned to Twitter, Facebook, Qik, Foursquare and Ustreamed it live.  Matt tweeted, “Proposing to the woman of my dreams. @lolofishyfoo turn around Live stream” and included the live link for all of his Twitter followers to watch.  He sent out the live link to both of their families, while his friend was filming it with his new iPhone, streaming the proposal live.  Once Matt arrived at the location, he checked in via Foursquare, which also sent out the URL to his Foursquare audience.  The whole World Wide Web watched Matt get down on one knee and propose to the love of his life as she said yes.  A few minutes later, he updated his Facebook status to alert everyone that she said “yes.”  Mazel Tov Matt & Lauren!

While integrating social media into your engagement process can turn out great (as it did for Matt), it also poses serious sociological implications.  As the web progresses, society is lagging behind the impact social media and new technology will have on marriage and the overall courtship process.  People will now see a digital footprint of everyone you have ever dated via Facebook pictures before you decide to marry.

If you are integrating social media into your proposal, you have to be 100% positive your significant other will say yes or else it could turn out very sour.  Imagine u-streaming the special moment, only to be turned down for your entire network to watch.  Not only would that be crushing, it would make for a terrible water cooler conversation Monday morning in the office.  Once you put it out there, there is no turning back.

Proposing marriage is nerve-wracking enough, but now with the advent of social media and having 1,500 Facebook friends comment on your engagement or the size/shape of the ring you received is even more daunting.  This puts a lot more pressure on everyone involved, including the one purchasing the diamond!

Another issue created by social media in the engagement process is the rising obsession for status changes on Facebook. People are now more excited than ever to change their status from “single” to “engaged” to the ultimate goal of writing “married.”  Social media will have serious impacts for people who are at every stage of the engagement.  Imagine realizing a few months after being engaged that your fiancé/e is “not the one” after you have ustreamed your proposal.  Now, the next person you pop the question to will always see the first video living somewhere on the World Wide Web.  Transparency in relationship building will entirely change.

For women who are worried about their “biological clock” ticking and trying to find love, waking up every morning only to read that yet another friend is “engaged” in your Facebook Newsfeed can also add extra pressure to finding a mate.  As the owner of a social media agency Ruby Media Group, I am all for the advantages that social media can bring into your professional life.  However, I do think that as technology speeds up, people need to keep up and examine the societal impacts that the technology has and use it accordingly.

You ultimately need to decide for yourself if you are going to share your life publicly or privately. If you choose to share it publicly, you need to understand the impact that it will forever have on your relationships moving forward, and on the digital footprint that you leave behind.

Finally, it is important to keep in mind the preferences of the person you are about to marry before integrating social media into the engagement process.  If you are a social media maven, but your partner is very private, s/he may not react kindly to finding out that their private moment is now on YouTube for the whole world to see.  Know your partner and yourself before choosing to share your moment publicly.  The question is up to you: Will you tweet, update your Facebook status and share your engagement in real time or will you keep it private?

Date material on the other hand, insofar as my subjective notion of it applies, is a girl who is inventive, intelligent, fun, sweet, interesting, and so on – all the factors my girlfriend is. It s early days definitely, but I love spending time with her, I look at myself fortunate to know her, and I trust her. The truth that she s beautiful on the outdoors also is just a bonus – I can t aid but really feel a small smug. Hookups have a tendency to be based on aesthetics and sexual chemistry alone. I had sex with a lot of girls who were definitely not my variety and it was purely about the physical. rubratings ft lauderdale The SPDate site is linked with third party adult sources and redirects users fairly often. AdultFriendFinder This is one of the biggest hookup websites worldwide. It caters to all kinds of hookup arrangements for a incredibly reasonably priced value. There are no premium plans or add on purchases offered on the SPDate app. Therefore, you don t have to worry about payments or recurring bills. Primarily claimed whilst the mature connection platform, SPdate assists encounter the potential group of some physique. During your spare time, if you favor having a superior time, you could have the suggests to access this web page and make use of the consideration catching options. In case if you have a paid membership regardless of its duration time, you have no limitations in utilizing the functions and characteristics of the SPDate website. oc listcrawler And even if there are some girls, they are normally in a pack. And in each and every girls group, there has to be a chaperone that defends her friends from males. And to be fair, there are a lot of factors for that. When it comes to meeting girls at clubs and bars, you are spoilt for option.