A few weeks ago, I met a new client for the first time, a 44-year-old male in Washington, DC.  He has his heart set on having children, which is obviously a worthy and noble goal.  While he was a little unclear about the specifics, he knew that he likely has to find a partner who is younger than he is due to women’s biological clocks.  While that makes complete sense, what bothered me about our interaction was not that he would like to find a younger woman but that he was actually saying negative things about women who were even five years younger than he is for having made the same life choices—delaying having children—that he did.

In another meeting recently, I was talking to a 69-year-old male client, and after asking him about his work and hobbies, the conversation turned to what characteristics he was looking for in a partner.  His immediate response was, “I want to meet a woman anywhere from age 40 to 60.”  He thought I was going to praise him for being so “open-minded” because his age range included a 20-year span.  Not exactly.  I politely said to him, “Why would you not include women up to your own age, or even older, in your search?”  His replied, “Women in their 60s are too old for me.  They have different interests and can’t keep up.”

And lastly, I was meeting with a woman who is 59.  She is very active and practices yoga, plays tennis, and rides a mountain bike.  When I asked what age range of partner she was looking for, she said, “Someone younger then I am, please.  Men my age are out of shape and old.”

It’s interesting that all three clients had different reasons for wanting someone younger.  They assumed that someone his or her own age was in a completely different situation.  Why, though?  As one of my 72-year-old female clients put it best: “What?  I was good enough to sit next to you in kindergarten, but now I’m too old for you?”  She really drives the point home.

Fairly consistently, almost all of my over-50 male clients tell me that women don’t age as well as men. And you know what the women say? Men don’t age as well as women.  The moral: We all age.  Everyone gets face lines and dark spots, everyone’s metabolism slows, and everyone can’t be the 20-year-old sports star that he or she used to be.  Please don’t make overarching assumptions.  I know plenty of “old” 30-year-olds who sit on the couch all night, and I know plenty of “young” 70-year-olds who love skiing, sailing, and chasing their dogs around the park.  It’s all relative.

We’ve all heard the term “racial discrimination” or “sex discrimination,” of course.  And I think we can all agree that showing any outward racism or sexism is not only inappropriate but also ignorant.  Why is it then, that when I ask these clients about their dating deal-breakers, so many people list very specific ages within which they will date, not leaving an ounce (or a month) of wiggle room?  Does that make a point that people age discriminate when dating?

On 100hookup, and most online dating sites, the age of a person is front and center, along with a photo and a username.  It’s only natural that we use this number to filter through potential matches since it’s right there staring us in the face.  But if we’re out hiking, at a speed-dating event, or at a networking group, people don’t have Post-it notes on their foreheads saying their exact age.  (That’s what https://how-old.net/ attempted to do.  Sadly, I got the following result… and I’m in my mid-30s!) 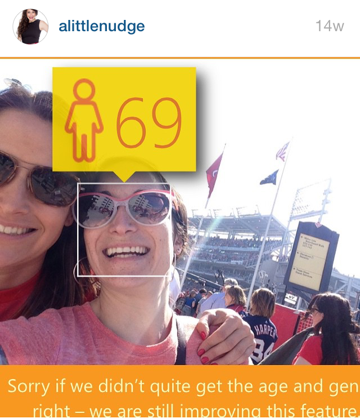 My advice is that just because you can dismiss someone solely based on age does not mean you should.  We all get older, and no one likes to be judged for this fact.  In the scope of life, what’s one or two years either way?

Erika Ettin is the founder of A Little Nudge and author of acclaimed Love at First Site. Her work has been seen on NPR, Talk Philly, The Washington Post, and more. To join her mailing list for tips and events, please join here.

Hence, I ve really satisfied to attend they and also a lot a lot of enjoyable. As you can think about, it has got absolutely not not too long ago been without not successful suits, but i do think this is precisely rather a typical procedures. You will not get it all in an immediate, and some days of messaging is usually necessary to arrange a meetup. I extremely doubt people that whine about bots on this site. rub rating ut Dating internet sites are secure and care about their customers that is while at Douwant.me, we confirm our customers by email and contact. Not taking flings seriously is widespread for adults lacking a significant companion. They get lonely and think the only option is hooking up. Holidays, birthdays, and weekends are hard to navigate with out a plus one particular. Alternatively of feeling down about your status, put your passionate side to function, and get outcomes. I also agree to receive flirts, messages, account updates and particular gives via email. Persons appearing in photographs may well not be actual members. I met Rosaline, a young model on the nearby hookup web site. We spent awesome getaway collectively and I didn t need to have anybody else at that moment, she was so authentic on those sunny beaches. mega personal hookup Meanwhile, ladies who have online dated in this time period are five instances as probably as males to think they were sent too many messages (30% vs. six%). A small share of Americans say they have been in a committed connection with or married someone they met by means of a dating internet site or app. About a single in ten U.S. adults say this (12%), even though these shares are larger amongst LGB adults, as nicely as these ages 18 to 49. After a couple of hours at the museum, the ladies drove to a nearby Korean barbecue restaurant.